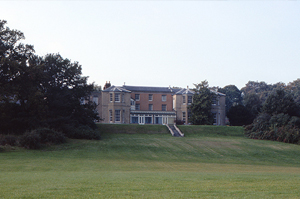 Tatchbury Mount Fort In the centre of the parish, in the grounds of former Tatchbury Mount Hospital, is an oval hill visible for miles around, which was once an Iron Age hillfort. It occupies the summit of low hills, thus receiving protection on all sides from sloping ground.

The sides of the fort are steep and entrenchments follow the contours of the hill. Further defence was ensured by the lower rampart with steep sloping inner sides to deprive an attacker of cover, and possibly a wooden palisade crowned the top of the fort. The summit is a near-level plateau of just under 5 acres in area.

The earthworks were partially levelled on the eastern side in the late 18th Century when the ground was landscaped for a large house built on the site with formal gardens. Two parallel banks are clearly visible around much of the hillfort, but it is the northwest corner that has survived the best. Here the defences can be seen to have been triple banked. The entrance, the most vulnerable part of any fortification, probably follows the course of the present driveway to the summit.
For more info visit:
https://www.newforestnpa.gov.uk/things-to-do/walking/historic-routes/historic-trail-tatchbury-mount/
For more images see gallery below. 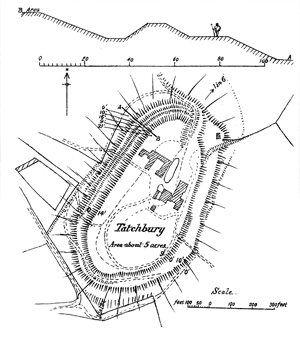 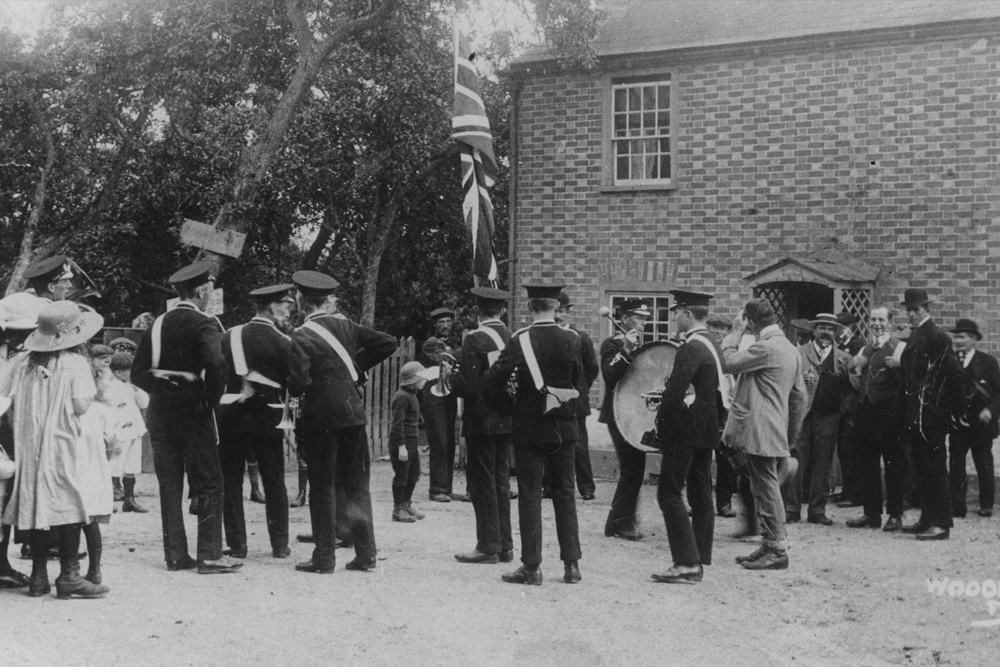 The Domesday Survey In 1086, the Norman King William the Conqueror commissioned a nationwide survey of his new kingdom to aid taxation. So searching was this inquisition that its victims spoke of the final assembled document as the ‘Domesday Book’: an ultimate judgement not open to dispute. Royal commissioners were sent to every part of England to compare the current population and possessions with those before Norman rule. Dividing the country into shires and taking the hundred as the territorial unit, it lists each Manor by name, its possessor in King Edward the Confessors time and also at the time of the survey, its rateable value for taxation (the Geld), its extent and resources. Its men, accor¬ding to their various grades are also recorded as are as are its livestock. Each entry is normally concluded with an estimate of its value, either actual or potential.

The Kings local representative in the county was the sheriff, upon whose efficiency the strength of administration depended. Hampshire had at least one Anglo-Saxon sheriff, named Ezi, who owned land at Tatchbury. This he gave to the Abbey of St. Peter’s at Winchester as a gift for King Edward’s soul:

‘The same abbey has half a hide at Taceberie. Ezi the sheriff held it of King Edward, in parage; and after the death of King Edward he gave it to the same abbey for the repose of his soul, before King William had come. It did not pay geld. It is waste; but it is, and always was, worth 10 shillings’.

A hide was the measurement of land for taxation purposes. From the Anglo-Saxon word meaning “family”, a hide, was a land-holding that was considered sufficient to support a family (higher class, land owning family). This was equivalent to 60 to 120 old acres (approximately 30 modern acres) depending on the quality of the land. Read More

A virigate was reckoned as the amount of land that a team of two oxen could plough in a single annual season. It was equivalent to a quarter of a hide, so was nominally thirty acres.
Parage refers to joint tenure.
Tatchbury also has a second Domesday entry which, under the Normans, became part of the New Forest (a ‘forest’ was an area preserved exclusively for hunting ‘beasts of the chase’ - primarily deer and wild boar):

‘Bolle and Ulviet had 2 hides in Teocreberie and they were assessed at that amount. It is now in the forest. There was land for 3 ploughs. It was worth 30 shillings’.

At the north east of the present day parish is Ower, referred to in the Domesday Book as Hore. However it could quite conceivably refer to Ower at Calshot as both come within the same geographical subsection, the Redbridge Hundred. However, this is probably the Ower in Netley Marsh and neighbouring Copythorne Parish as the land at Ower and land to the west at Testwood was owned by Eisi and Aisi respectively, which could be misspellings of Ezi as the scribes wrote what they though was the correct spelling. It is therefore quite possible that Ezi the sheriff held much of the land which constitutes the north of the parish:

‘The Abbey of Glastingberie holds 1 hide in Hore; and Giselebert de Bretevile holds it of the abbey, Eisi held it of the abbot, and could not betake himself where he would; but always paid rent to the abbot. There is land for 2 ploughs. In the same demsne is half a plough, with 6 bordars. There is woodland worth 5 swine. It was, as now, worth 20 shillings’.

The demesne was a piece of land attached to a manor and retained by the owner for their own use.

A bordar was person ranking below villeins and above serfs in the social hierarchy of a manor, holding just enough land to feed a family (about five acres) and required to provide labour on the demesne on specified days of the week. A villein, otherwise known as cottar or crofter, is a serf tied to the land in the feudal system. Villeins had more rights and social status than those in slavery, but were under a number of legal restrictions which differentiated them from the freeman.

At the time of the Domesday Survey Testwood is owned by Hugh de Port, Bishop of Bayeux, France:

‘The same Hugh holds half a hide in Lestred and Hugh holds it of him. Aisi held it of King Edward. It was then, as now, assessed at half a hide. There is land for half a plough, which is there, and 4 villeins and two acres of meadow. It was as is now, worth 10 shillings’.

Further land at Testwood, possibly the south as it became part of William the Conquerors New Forest, is spelt Lesreorde. TRE in this entry means ‘in the time of King Edward’:

‘Earl Rodger had Lestreorde. Two allodial owners held it TRE in parage, and this land was assessed at 1 hide. TRE and afterwards, it was worth 40 shillings. It is now in the forest, except the forth part of 1 virigate which is held of the Earl by a certain man who has 3 bordars. It is worth 3 shillings’.

‘The sons of Godric Mal hold Hangre. Their father held it of King Edward. It was then, as now, assessed at one hide. There is land for 1 plough. There are 2 villiens and 5 bordars with 1 plough and an acre of meadow, and woodland worth 1 pig. It was worth 20 shillings; it is now worth 10 shillings’.

Netley has two Domesday book entries, both having a different spelling. The second entry has become part of the New Forest.

‘Two allodial owners had 1 hide in Nutlei. There was land for 2 ploughs. It was worth 25 shillings’.

‘Two allodial owners held 1 virigate in Nuteli, in parage; and it was assessed at that quantity. It is now in the forest. There is land for 1 plough. It was worth 6 shillings’.

Allodial owners refer to ownership of land freely held, without obligation of service to any overlord. Allodial land tenure was of particular significance in western Europe during the Middle Ages, when most land was held by feudal tenure. In England there was a considerable amount of allodial land before the Norman Conquest, but it disappeared under the new rulers.