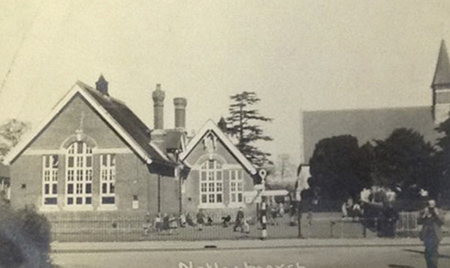 June 1907 to 1911 – Letters between the Education Board and the church argue over the official name of the school. The Education board insisted its name was Netley Marsh Church of England School. However, the church disapproved of this and refused to include Marsh (the official civil parish title) and to call it anything other than Netley St Matthew Church of England School. This dispute seems to have rumbled on over time, however at some point the church must have been over ruled as this is the name used today.

1914-1918 WW1 Many of the children at school would have had fathers and brothers away at war. The village war memorial records the loss of 30 men from Netley Marsh parish. Newspapers at the time reported that during the war years, the children grew vegetables on the school allotment and donated them to a hospital in Millbrook.

1920’s The Church hall was built – a third class was housed in the room at the back and the hall was used for PE and dinner (food cooked on site). Read More

1939-1945 WW2 – 2 Air raid shelters were built on the field behind the church hall. All children had to carry a gas mask at all times and practice air raid drills. Children were kept awake at night by the bombing in Southampton and the planes flying overhead. Evacuees came from Southampton, Portsmouth and London moved into homes in Netley Marsh. Local children attended the school in the morning and the evacuees in the afternoon. On the 26th October 1942 a single German plane thought to be aiming for the BBC wireless station at Bartley, dropped its bombs along the Woodlands Road, one fell in the churchyard and blew out the glass windows and roof tiles of both the school and church. People in the village were worried the school had been hit, fortunately not, but a family of three died in Woodlands Road. The school was closed for a few days until it could be made safe. Find more about this in the WW2 section

1950s Mrs Pitt was the Headmistress with teachers Miss Petty, Mrs Bryant, Miss Collard and dinner ladies Mrs Shuttler, Mrs Graves and Mrs Whinstanley. The caretaker Mrs Gilpin was responsible for ensuring the fires that heated the school and produced hot water were lit before school and kept stoked during the day.

1965 The air raid shelters were demolished and replaced with two temporary wooden classrooms (behind the church hall).

1972 Changed from a Primary School to an Infant School.

1991 The Netley Marsh First School Governors recommended the school should close due to falling pupil numbers. An action group was set up by the parents to save the school.

2000’s The schools is thriving with three full classes of children (Year R-Year 2). It is part of the Oaks Federation which sees it working in partnership with Copythorne and St Michaels Lyndhurst. Many traditions are upheld, Christmas nativity, Easter Service, Harvest festival, Sports day, Pancake races, and Founders day has been introduced. 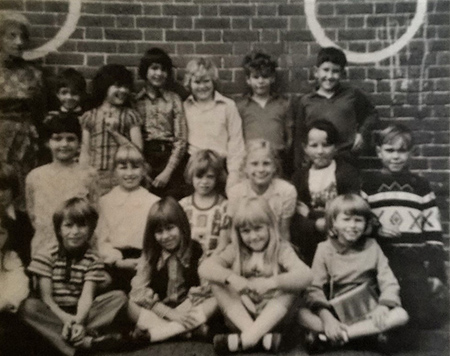 The girl’s uniform was a green and white summer dress / grey skirt uniform
with a blazer with green and gold badge and a purse with dinner money in (1960’s).

Monday morning you had to write about what you did at the weekend.

A hand bell was rung to signal the start and end of school and playtimes.

Grace was always said in the classroom before dinner.

Everybody had to put their chair up on the table at the end of the day.

The reception class had phonics posters round the walls.

Playtime - Hiding behind the curtain, French skipping, skipping and singing to Casey Jones.
Conkers (there was a big tree in front of the school), marbles.

A brick wall ran along the side of the playground with with broken glass set into the top!
There was no gravel car park at that time, or fence, the school field went right down to the road,
with balls often bouncing into in the road!

Couldn’t see out of the windows in the back classroom, it was too high up.

Playing crab football in the church hall on wet days and the wooden bars and metal framed PE apparatus in there.

Not allowed in playground if there was a funeral.

Fairground children joining the school in the winter months.

In the 1960/70’s sports day was a highlight. Plastic balls with the holes in, egg and spoon, three legged,
wheelbarrow and sack races. Carlo’s ice-cream used to come with free ice-cream as part of the day.
We enjoyed eating the slab fruit cakes. Sports day went on for the whole afternoon and it was the only time,
apart from the Christmas nativity, that parents came into school.

School dinners came from Eling School. Memories of boiled bacon carrots and mashed potato,
rice pudding & semolina with Jam, sponge vanilla cake & pink custard, chocolate crackle and fake cream, prunes and custard.
Salad and packets of cheese and biscuits (which became rubbery on hot days). Milk was delivered by milk cart from the local dairy.
By the time in, in the winter, it was often frozen. It was common to find the silver foil milk tops had been pecked by the birds.
The little milk cartons were thawed next to the big heater (referred to as the ‘tortoise shell’) in the classroom.
The best milk was the warm milk at the front, the milk at the back could still be frozen at playtime!

If a child had hiccups Mr Pothecary would hit a wooden ruler on the desk to shock them out!
He had retrained as a teacher and had lots of creative ideas. He was keen on music and movement.
Singing together was a BBC schools broadcast that we listened to regularly.

There was no playgroup and no transition before starting school.
Most children had never been away from their mum until their first day at school
so there were many tears in the first few weeks.

Children arrived by horse, horse and cart, walked or came on the double decker school bus.
At the end of the day, a teacher used to take the children across the road to the public bus that stopped outside the White Horse.

The first lollipop lady was Mrs Baker, followed by Mrs Judd, Mrs Cooper, Mrs Rogers and Mrs Parker (not necessarily in order).
Campaigning for road safety began in the 1970’s. At that time there were no lights or roundabouts to slow the traffic down between Calmore Corner (Testbourne) and Cadnam roundabout, it was one long, straight stretch and traffic flew through. 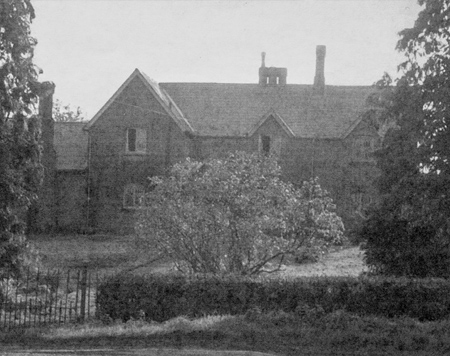 Hampshire Reformatory School for Boys
The Hants Reformatory, one of fifty established nationally, was founded in May 1855 by Mr. H C Thompson. The site, consisting of a farmhouse and twenty acres of farmland, was rented from Mr. Compton. The farmhouse was adapted and extended to accommodate sixty boys; juvenile offenders aged 12-15. The school opened in November with Mr. Williams as Master.

A larger dormitory, workshops and a cell were added in 1858.

In 1860, Mr. William Harold was appointed Superintendent, with his wife Susanna in the position of Matron. Both had previously been Superintendents at the Leicester Reformatory and bought with them their School Master William Oaksford. They immediately set about the building of a new schoolroom.

At approximately 10pm on 11th October 1867 a fire broke out. The boys were roused and attempted to help save the furniture and put out the fire whilst a messenger rode to Southampton on horseback to summon fire engines. Two engines arrived and drew water from the wells. When they ran dry water was collected from nearby ponds. The main building was completely destroyed and the boys were accommodated in nearby cottages, twenty were taken in by the local vicar. The replacement buildings were completed the following year.

The 1871 Census shows William Harold as Superintendent, wife Susanna as Matron and their four children William (11), Maude (10), Susanna (8) as scholars and baby Evelyn. William Oaksford as schoolmaster, gardener John Cunningham, nurse Jane Bull and 75 inmates. The primary form of instruction was in agriculture on the schools farmland, which included livestock, cows, pigs and poultry, together with a well cultivated garden where they learnt horticulture. Mrs Harold taught the boys to make their own clothing, boots and shoes and to bake their own bread. Read More

By 1890 the farmland had increased to 36 acres. The adjoining woods are marked reformatory Copse on maps of the time. Mr. Butt the bandmaster instructed the boys in music and military drills. On leaving, the boys were encouraged to enter the military as a means to escape their former lives and were said to have made good soldiers in the colonies.

Articles in the Hampshire Advertiser 23/09/1872 and 21/09/1872 describe the annual ‘Harvest Home’ event, attended by 200 locals. These events showcased the products of each department - clothes, quilts, rugs, cushions and shoes the boys had made, the best of the vegetables grown (pumpkins, marrows, onions, potatoes and turnips) and woodwork items such as ships and cricket balls. This was followed by an afternoon display of sports, such as ‘flat racing, sack racing, jumping in sacks, wheeling wheelbarrows blindfolded, climbing the pole, high jumping and scrambling for nuts, gingerbreads and sweets’. At 6pm the great treat began – a harvest supper for all the boys and 30 guests, followed by a concert with some of the boys and guests singing, and music from the band. The reporter concluded,
“those who take an interest in such matters should pay the Reformatory a visit, as they will there find boys who previously were ragged, ill fed, and almost outcasts looking remarkably well and happy, while they are also receiving a good education, being learnt a trade, and every means are afforded for them to become respectable and useful members of society”.

Mrs. Harold died in 1877 and is buried at St Matthews. Her two daughters, Maud and Alice, took on the role of Matron with son William working as an assistant. In 1887, the Reformatory appeared in the national news after winning a High Court Case against the church. Members of the congregation complained about the smell given off by the boy’s corduroy suits when wet and tried to stop them attending services. The situation became so heated the churchwarden assaulted one of the boys. The boy received damages of one shilling.

William Harold (junior) and his wife Emily took over as Master and Matron in 1895.

By 1899 Children stopped being sent to Reformatory schools and so the numbers declined until the eventual closure of the school at the end of September 1907.

The reformatory had been the village venue for many social occasions.

The graves of Susanna Harold (left in photo 1) and William Harold (right in photo 1) on the left hand side of the path leading up to St Matthews Church. In affectionate remembrance of Susanna the beloved wife of W F Harold Superintendent Hants Reformatory School who died 27th March 1877 aged 42.
In loving memory of William Frederick Harold Superintendent Hants Reformatory School for 32 years died 1st November 1900 aged 70.
The grave of William Oaksford can be seen behind.(photo 2)
The inscription reads ‘William Edward Oaksford died 11th March 1890 at the age of fifty. The faithful and valued schoolmaster at the Hants Reformatory for 28 years’ 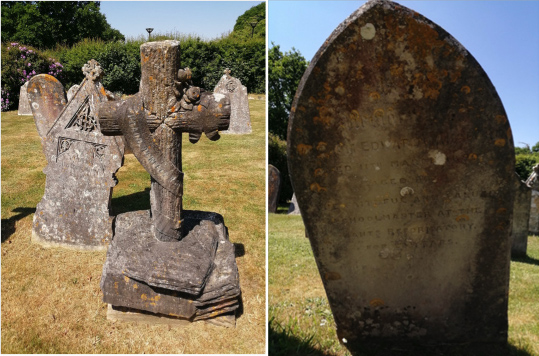 Later history of the site

In 1908 the school effects were auctioned off and the site put up for lease. At some point, it became Netley Marsh and District Agricultural Co-operative societies, which included a steam laundry and was renamed Marley House

In the 1970's it was purchased by Mr. Gifford and Partners and the original reformatory buildings were converted to office accommodation and renamed Carlton House. New buildings were added, the last being the studio in 2005.The current owners Ramboll (a Danish, global civil engineering company) have put the site up for sale with prior approval for the change of use to residential.

2019 The original reformatory buildings are currently in use as offices. 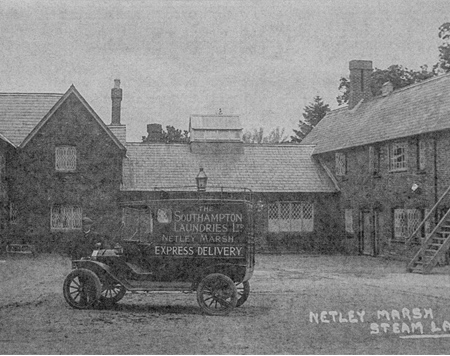 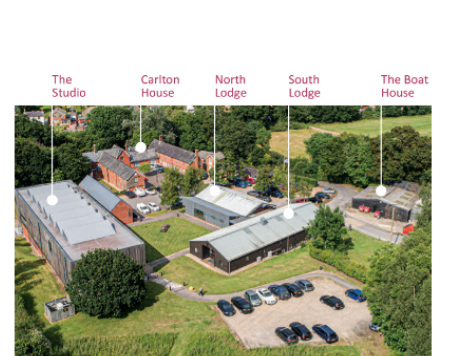 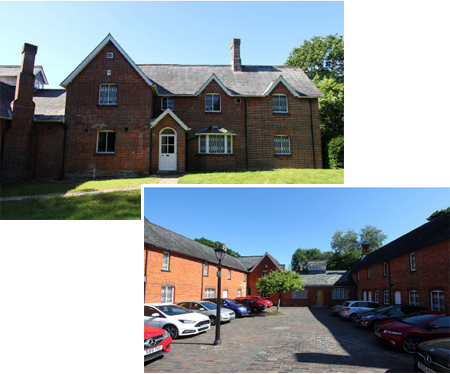